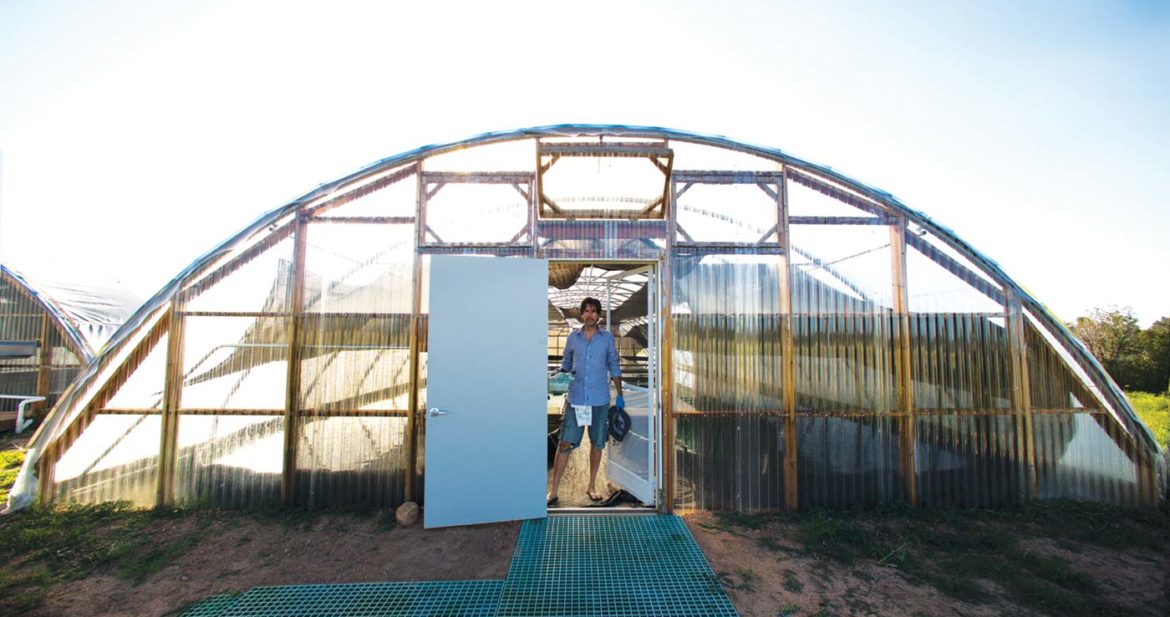 IN SANTA FE, NICOLAS PETROVIC IS GROWING THE HUMBLE GREEN SLIME THAT COULD FEED THE FUTURE

It’s winter when I visit Nicolas Petrovic at his small farm on the Santa Fe Community College campus, and there’s not much happening in his two hoop houses. But the long, oval-shaped ponds inside give off an unmistakably briny smell, hinting at the unique crop that grows here in the warmer months.

Petrovic is an algae farmer—or, more specifically, a spirulina farmer. As the company Apogee Spirulina, he sells his products online and at the Santa Fe Farmers Market. There, he gets plenty of questions about his growing practices, the nutritional content of spirulina, what it tastes like, and what, exactly, this green stuff is. By now, he’s accustomed to education being a big component of his job.

The spirulina product that Petrovic sells is different from many on the market in that it takes the form of crunchy flakes rather than a fine powder. This, he explains, makes it more food friendly: in addition to the obvious smoothie application, his suggestions are, “Mix it in with your hummus. And, it goes really deliciously well on avocado.” After a little experimentation of my own, I’d add that it’s great with toasted sesame seeds on top of fried rice.

Spirulina has a lot to recommend it—both in terms of nutritional value and environmental footprint. The microalgae is super dense in protein and omega-3s, generates huge amounts of oxygen from nitrogen and CO2, and, unlike most crops, doesn’t require freshwater to grow—in fact, the brackish water used to grow algae can be recycled many times for subsequent algae crops. In a future where freshwater will be at even more of a premium than it is now, the ability of spirulina to thrive in hot, dry climates and in brackish water will be a huge advantage.

Water isn’t the only resource scarcity algae can potentially alleviate. Elsewhere in Santa Fe, Eldorado Biofuels is growing algae to make biofuel with industrial wastewater from fracking and dairy farming—water that can be full of oil, grease, and industrial chemicals. It’s not exactly creating something from nothing, but it’s pretty close.

“People have no idea how rich the history of algae cultivation in New Mexico is,” Petrovic says. He is, however, a wealth of knowledge on the topic. He went through the Biofuels Program at SFCC, which focuses largely on algae cultivation for fuel. After finishing that program, he traveled to the south of France in 2012, where he learned about spirulina cultivation for food from small-batch master growers. After spending most of the last decade of his life learning about and growing algae, Petrovic has become something of an evangelist for the green stuff.

As an example of spirulina’s incredible potential, he tells me the story of moving his algae production from his home into the greenhouses on the SFCC campus. After the initial move, he had a scare when the water in his ponds suddenly leveled out at a pH of 9.6—too low for algae to thrive. The algae turned grey, Petrovic says, and “fell flat—the ponds had gone totally weird.” He called one of his mentors in France to ask what was happening, who assured him that this was normal—just wait, he said, spirulina never dies. After panicking for a couple of weeks and thinking that he’d have to start all over, sure enough, the algae started greening again. After going through a few generations of evolution— spirulina reproduces every twenty-four hours—“it had come back and morphed into a new strain specific for Santa Fe conditions, specific to right here,” he says. He’s never had problems with his ponds since.

As great a source of nutrients as algae is, and as easy as it is to grow, one would think that it would have taken off as a meat substitute/protein source in its own right by now. The thing is, Americans are a little squeamish about eating algae—at the end of the day, it’s green slime that smells like the ocean. But algae has been a component of some coastal cultures’ diets for centuries: Japan consumes many different species of algae, some of which are more recognizable to us as seaweed (“seaweed” refers to a few species of algae categorized as macroalgae), like nori and kombu. Though spirulina has some history in the US, it’s as a nutritional supplement. It’s been sold in dried form as an omega-3 supplement and a component of vegan protein powders, and the Food and Drug Administration has approved it for use as a food coloring agent, mostly used for candy. But they have yet to sign off on algae as a food in its own right.

Nevertheless, Petrovic has well-founded hopes that algae, and spirulina in particular, has a big future in the US. Since it first started being cultivated at scale here in the 1970s, it’s always been vegetarians, vegans, and the health-conscious who have gravitated towards spirulina supplements as a source of protein and micronutrients—and now there’s the massively growing health and wellness market to sell to. “They’re saying by 2025, it’s going to be almost a $24 billion per year industry. This,” he says, pointing to his currently-dormant ponds, “is part of it.”