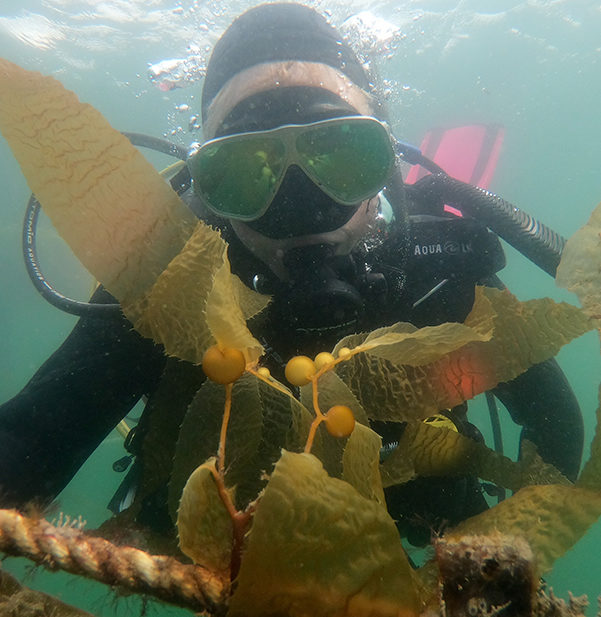 You are here: Home / Edible Communities / Saltwater and Sunlight

Imagine 25 acres of native edible plants growing 30 feet high. Each foot can produce about four to six pounds of nutrient-dense, umami-flavored produce. The farm requires no inputs—no watering, no fertilizers, no herbicides, not even compost. It attracts wildlife, enriches the ecosystem, and may even help combat climate change.

This is the vision of Sunken Seaweed cofounders Leslie Booher and Torre Polizzi. Their farm would be located somewhere offshore of San Diego and would grow a variety of native seaweeds, from ogo to kelp to sea lettuce.

“We’d like to disrupt the seafood plate in San Diego and push lower-food-chain items to the center of it,” explains Booher, chief of laboratory operations.

The duo formed Sunken Seaweed in 2017 when they needed to apply for an incubator with the Port of San Diego, who was looking for small start-up companies in the “blue economy.” After a year of market research—essentially getting seaweed from a colleague up north and selling it to local chefs at a loss—the Port of San Diego granted Sunken Seaweed the opportunity to do research and development for their nascent underwater business off the G Street Pier in Downtown San Diego.

Sunken Seaweed harvests kelp sporophylls (reproductive tissues) from off Point Loma and brings them to their SDSU laboratory, where they trigger them to release spores. After four to six weeks, they bring twine the spores have settled on to their pilot farm, a humble quarter-acre patch off the unused G Street Pier.

The first months were hard. “It’s definitely been a lot of failing forward,” says Booher, “and we’ve adjusted protocols accordingly.” They had to learn when to bring young seaweed from their lab to their G Street garden, which they discovered is when they’re big enough not to be fouled over by competitors, but before the holds (the root-like part of the kelp) lose strength. They also learned not to outplant when the water is 80 degrees, which, is too warm for the juvenile crops. They lost crops in the lab and in the field during this learning phase and continue to develop their protocols for abundant seaweed yields. 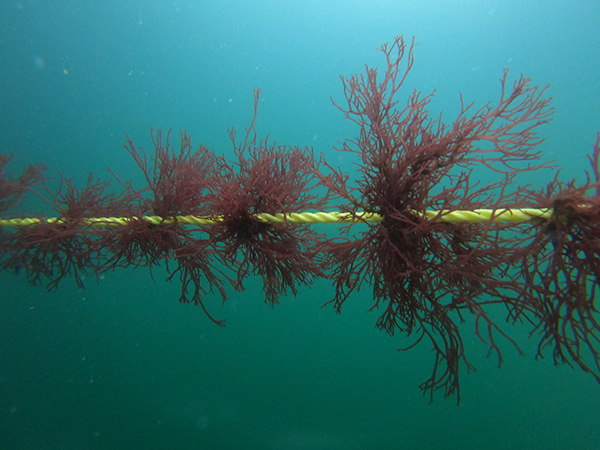 “We try to use as much of the water column as we can,” explains Polizzi, chief of field operations. “We grow ogo and other smaller species at about five feet below the surface and Laminaria and Macrocystis [kelps] at about 20 feet below the surface.” Eventually they’d like to grow shellfish—mussels, scallops, oysters—in hanging baskets, socks, and lanterns intermixed with the seaweed lines.

“I like growing food, creating substance for people out of nothing. It’s just saltwater and sunlight,” says Polizzi. Another product they have in mind is oarweed, the native version of kombu, which is used for a broth base and “when cooked with beans, softens them right up,” says Booher. Elk kelp, whose stalks can be turned into kelp pickles, and other varieties are also on the list.

Besides kelp, oarweed, sea lettuce, and ogo, they’re excited to grow sea truffle, a red seaweed with a nuanced flavor. “You bite into it and the back of your mouth will just swell, and it will be like that truffle-y taste and you breathe out that really truffle-y smell. And then the tip of your tongue is like black pepper,” waxes Polizzi.

Booher and Polizzi use the pilot garden for fleshing out their laboratory and outplanting methods. With all the bilge in the bay, the products they grow there aren’t suitable for consumption. Their ultimate goal is to establish that 25- to 30-acre open-ocean site outside the bay.

The permitting process for open-ocean farming is long and complicated. “We estimate that an offshore scale-up of our project would take around three to five years, and that’s with a full team at the Port of San Diego helping us,” says Polizzi. While seaweed farming may have a neutral or positive environmental impact, they think it’s a good thing that it takes time. “It’s a new farming method in California and involves growing a domesticated species in a wild habitat. You can’t just put a border around a site in the ocean and expect things to stay in or out of it. And our coastal ecosystems are very fragile, so it’s paramount that the regulations for this practice are done right the first time.”

In the meantime, Sunken Seaweed was awarded a grant to grow seaweed in tanks, and they expect to have product on the market by fall of this year. Booher and Polizzi are confident that creative and community-minded chefs can create even more tempting seafood plates with another level of regenerative local produce grown in San Diego.

*This story comes to us from Edible San Diego.