You are here: Home / Edible Communities / A Green Gusher In the Lone Star State 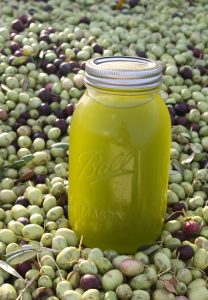 Oil comes naturally to Texas; some claim it’s in Texans’ blood. If you’ve grown up in East Texas or the Permian Basin, talking about that black ooze from the earth is as natural as breathing.

But in the last couple of years, talk has emerged about a different variety of oil—that golden green oil that comes from olives. With Texas’s range of microclimates, this ancient Mediterranean fruit is taking root here to a degree that has California noticing. Texas now ranks as the second-largest producer of olive oil in the United States. In the Houston area, a risk-taking group of growers is turning their hayfields and cattle pastures into olive groves.

In his weathered boots, spurs, and pearl-snap denim shirt, Randy Brazil looks more like a cowboy than an East Texas olive grower. Instead of mounting the horse waiting in his corral, Brazil and his wife, Monica, who run Southeast Texas Olive, stroll to the barn, grab a bottle of their award-winning oil and pose with the trophy that proves it. In 2017, extra virgin olive oil from their property competed among entries from 26 countries, winning second place in the New York International Olive Oil Competition. Partnering with fourth-generation farmers Rhonda and Steve Devilliers and their son and daughter-in-law Culley and Melissa Devilliers, the Brazils have turned their former neighbor’s 40 acres of Arbequina olive trees into an operation that produced 11,660 bottles in 2015, their first harvest. This is not Tuscany. This is Devers, Texas, 56 minutes from downtown Houston.

There’s no shortage of water for the Liberty County farm. A creek runs nearby, and with a turn of the tap, 34,000 Arbequina trees can be drip-irrigated from the ranch’s pond. Orchard trees have been planted atop rows of three-foot-high berms to tolerate the prevalence of water and to mix the gumbo clay soil. Three harvest seasons into Brazil-Devilliers’ management, these Arbequina are thriving, producing an extra virgin olive oil that’s 100% certified organic. 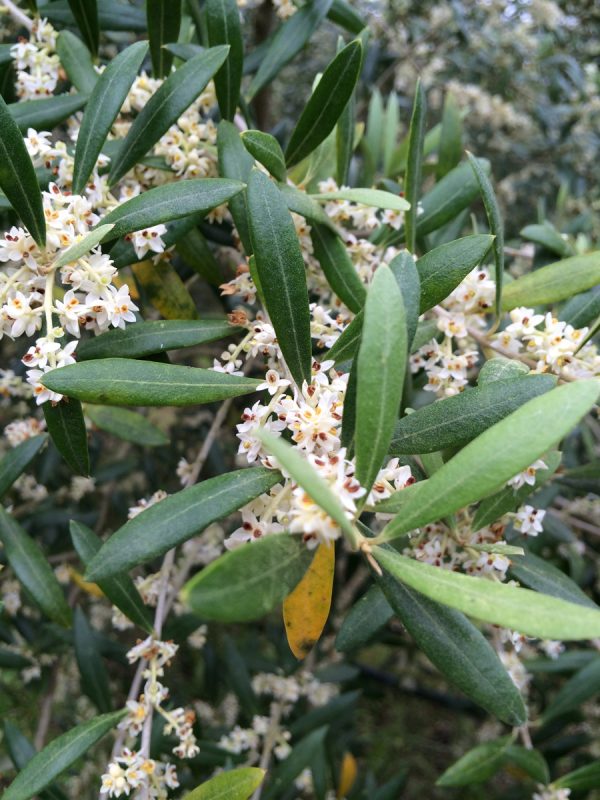 “Olives can grow in the worst soil in the world,” says Randy Brazil. “In the Middle East, you have rocky soil and 1,000-year-old trees in Israel still producing oil. Climate is key. If you have a 6 to 8 pH and keep the feet dry,” he says, you can grow in East Texas gumbo clay without a problem.

To help with the harvesting, the Southeast Texas Olive partners rely on an Oxbo harvester owned by Texana Brands and a Texas Mobile Olive Mill owned by Lone Star Olive Ranch. Both were designed to kick-start the Texas olive oil industry for orchard owners who can’t capitalize heavy equipment or hand-pick their crop. As the massive Oxbo harvester moves over the olive trees, fruit drops in a bin below, the crated fruit is either milled on site in the mobile mill or moved to a chilled truck.

The Texas Mobile Olive Mill operated by Lone Star Olive Ranch’s Christine McCabe and Cathy Bernell is a trailer-mounted, all-in-one milling facility for the field that can move from orchard to orchard within days and process olives to oil in the middle of the night. Since 2016, they’ve serviced 17 orchards in Texas, plus some in California.

McCabe and Bernell’s venture started 10 years ago when they purchased their 80-acre Madison County farm with the idea of becoming olive oil producers. People thought they were crazy. Olive trees had never been planted 100 miles north of Houston. No one knew what the weather would do, or if the soil would be right. It would be at least three years until the first crop if any. The partners had just come from running a cattle ranching operation. “We determined we were not ranchers,” McCabe says. “We needed to be farmers, instead.”

Before the purchase, they tested their idea in the property’s sandy loam/clay loam soil with a trial planting of Arbequina. It was a safe bet that bore fruit three years later. They also planted blocks of 26 varieties to see what would work. At the time, says Bernell, “there was no information available for our region. We wanted to find out what was going to work for us; that’s why we started experimenting.”

From that, they’ve found that Arbequina, Koroneiki, and Amfissa olives work best for their oil business. While their orchard produces small quantities of other varieties, their product consists of these three. “We have a couple of French varietals that are doing very well, like Picholine. And we have about six Italian varietals that are growing very well, but these do take a bit longer to come into production.” 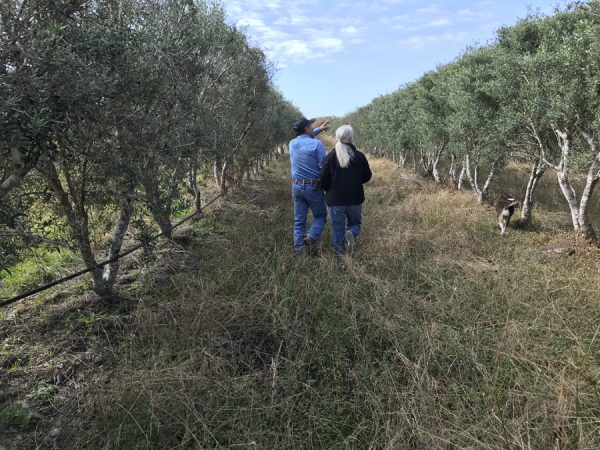 Picking olives by hand “sounds really sexy,” says McCabe, “but it’s not.” Harvest time is September, or sometimes even August. It’s hot. To beat the heat, picking starts at sunrise. “We’re subject to bees and wasps and snakes and spiders and rain. Folks come out and volunteer; they last an hour, then they’re gone.” So she’s developed a crew to get the job done. The fruit has to be picked before it heats up in the sun and starts to break down. Then, it has to be crushed and processed within 24 hours. In their fourth year of production, 2016, they picked and processed for almost four weeks and yielded three tons per acre. Three months later, during a mild winter, the temperature suddenly dropped from 75° to 15°. The freeze lasted four days, affecting every tree and killing 15 acres of saplings. “It was a very long process of recovery and hard pruning,” says Bernell, “taking back all the dead wood on the trees. It took nutritional management, trying to get them back into good health; a very long window of time to see if any survived.”

McCabe and Bernell were thrilled when, eight months later, their hard work yielded one ton per acre in a harvest that only took 10 days. By 2018, the orchard had fully recovered. “Year after year they said it couldn’t be done,” McCabe says of the naysayers, “but year after year we’re proving that it can be done.”

Just 30 miles from the coast, the orchard at Southeast Texas Olive faces different challenges. “The Gulf breeze keeps us from hard freezes in the winter, and from it being too hot in the spring,” says Randy Brazil. But in August 2017, Monica and Randy found themselves standing in water. Hurricane Harvey flooded their home and four feet of water stood in their fields for days. They had just planted 7,000 trees; they lost 4,000. 2019 will be their first harvest in two years. “Mother Nature, she can be so cruel,” says Brazil, who has income from working at the nearby Covestro plant for over 30 years and from working as a cowboy in the community, running 7,000 head of cattle on his ranch.

“A lot of people who do this, do this while they are doctors or lawyers or have an air conditioning business, but this is what we do,” says Michael Paz, who runs Texana Olive Ranch in Cotulla with his wife, Mary Rose, and his brother-in-law, Stephen Coffman, Jr. The farm has been in the family for 125 years. Cattle grazed and watermelon grew until activity slowed down and mesquite took over. Then, a well came in a few years ago, and “we made the ballsy decision of planting an olive orchard in South Texas,” says Paz.

To make it as full-time olive growers, they learned the business from those who were already doing it. They invested in the Oxbo harvester, built a mill in Cotulla, purchased a production facility in Kyle, and gradually established 150 acres of Arbequina, Arbosana, and Koroneiki olive trees. They’ve learned about other growers’ experiences from traveling to orchards in Australia, and from working their Oxbo harvester during Texas and California harvests. Since their first planting in 2012, the family has planted 200,000 trees in alternate years and formed some basic management practices that allow them to consistently produce the industry standard of three tons an acre per year.

“We farm olives. We make olive oil,” says Paz. “Lots of capital investment, lots of time investment, truly lots of blood, sweat, and tears; we’re in it too far now.”

Even if it takes two generations to turn a profit, for this group of Texas olive growers the rewards come in special forms and often unrecognized signs: recovery from disaster, improving the farm, having your olive oil grade better than USDA standards, or simply seeing, in late summer, the olive limbs so heavy with fruit that they bend low to the ground.

“I love it,” says McCabe. And moments like that are worth their weight in gold.

*This story was originally published in Edible Houston.