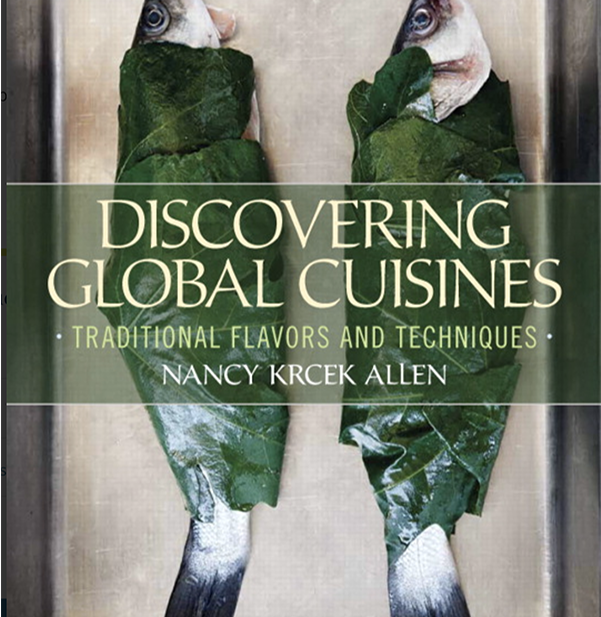 You are here: Home / Edible Communities / A Culinary Odyssey From Mexican Antojitos to Turkish Zeytinyağlı

You might say that Nancy Krcek Allen was “to the manner born.” However, her privilege was not measured in money or social standing, but rather in the richness of her cultural heritage and family life, which set her on a path to a fascinating culinary career. Her opus, Discovering Global Cuisines, is a compilation of her wealth of experience and knowledge in international flavors and techniques.

To describe this hefty yet beautiful volume as comprehensive is quite an understatement.

Authentic and meticulously researched, the nearly 1,000-page book is, as one reviewer wrote, “not just about recipes, but how cultures [have] shaped cuisines and are defined by them.” Each chapter opens with a map of a featured country, followed by synopses of its history and language, philosophy and religion, geography and climate, farming and agriculture, at-home dining and the inherent “tastes” in its culinary traditions. Other sections of the book highlight signature recipes and techniques of a particular cuisine and suggest ideas for variations and improvising. The 20-page glossary alone is worth gold as a reference tool.

Although it was written as a textbook, Discovering Global Cuisines reads like a cookbook and is therefore not just for culinary students but for anyone who is passionate about food and cooking—and anyone who loves to travel. Illustrated with enticing color photos, it takes you on a round-the-world tour through Asia, Southeast Asia, India, Europe, the Eastern Mediterranean, the Middle East, Africa and Latin America, many areas of which Allen has visited in her 30-year-plus career as a chef-educator and food writer. Some critics might note the absence of certain countries in this hefty tome, but Allen defends her choices. “I determined the content by what I thought was going to be the most inspiring to people. To me, these are the most important international cuisines. Many of them have been around for millennia.”

Raised in a multicultural neighborhood in a suburb of Detroit, the daughter of a Czech father and Ukrainian mother who had emigrated to the United States as young people, Allen was exposed to a wide variety of foods and nationalities from an early age. Her mother had arrived at age 17 in 1936, just before the Second World War, having been sent by her parents to live with an aunt and uncle who had a farm just north of Detroit. (Allen grew up calling them Grandma and Grandpa, since she had never met her Ukrainian grandparents.) “I think that since she was the youngest, her parents wanted to keep her from experiencing the privations of war,” says Allen. “The thing that always surrounded her was food—my grandparents grew all of their own vegetables and fruits and raised goats, rabbits, chickens, cows and pigs.

Allen’s parents’ house had a separate lot with a large garden. “Like my grandparents, nearly everything we ate we had grown ourselves,” she says. “We rarely bought food from the grocery store. So I also grew up being surrounded by food, like my mother.” The family cooked and ate mainly traditional Ukrainian-style dishes, but Allen’s mother also made friendships with the other women in the neighborhood, representing a multitude of ethnicities, and they all traded recipes with each other. “She learned from an Italian neighbor how to make lasagna,” Allen remembers.

The cultural diversity of her upbringing instilled in Allen the urge to travel, and she headed for Europe right after college at Michigan State and Wayne State universities, where she had majored in art. She had always had a passion for creativity, but it hadn’t yet manifested itself in the direction of a culinary career. It was 1971, and she and four other young Americans roamed through Germany, France, Italy and wherever else their fancy took them in a Volkswagen bus. “We were a bunch of hippies, but we were all interested in food, so we ate incredible traditional meals everywhere we went,” she says. “It was a trip that really opened my eyes, and I think that’s where my true interest in cooking was born.”

Eventually, the group landed in Crete and stayed for a year. “The experience of being in this village that was still relatively untouched back then was unique,” she recalls. “The local women would invite us to their communal kitchen and would take us out in the fields to pick horta (mixed greens), which they then simmered until wilted and drizzled with a little lemon, salt and olive oil—it’s a classic Greek preparation. I learned a lot about Greek cuisine during that time, including how to tenderize octopus by slamming it on the rocks!”

Despite her growing interest in food, and the inspiration she had gained eating and drinking her way through Europe, when Allen returned to the States she enrolled at the Detroit Barber College to learn how to cut men’s hair. “It was another kind of art,” she explains, “much more sculptural than cutting women’s hair.”

Allen moved to Traverse City in 1976. “I think I just wanted to get away from Detroit,” she says now. Although she didn’t really know the area, she took a leap of faith and followed her heart and instincts. “It sounded like a place where I could juggle my three main interests: art, barbering and food,” she says. She opened a “funky little barber salon” called The Rascal Frenchman and ran it for five years. In her free time, she took art and cooking classes at NMC, and—never the slacker—also took a job as a morning prep cook at Willie’s Rear, a popular local diner. “I absolutely loved it, and working there was what propelled me to go to culinary school,” she says.

Her choice was the California Culinary Academy (CCA) in San Francisco, which had struck her as being the most creative. “California was way ahead of everybody else then,” she says. “They had the food, and they had the restaurants.” Apprenticeships with James Beard Award winners Bradley Ogden (a Traverse City native) and Hubert Keller further whetted her appetite for working in the food industry. “Being in California was huge for me,” Allen reminisces. “As part of our program at CCA, we would visit all kinds of places, including artisan cheesemaking facilities, organic farms and wineries. It was a great education.”

Returning to Northern Michigan after culinary school, Allen met and married her husband Bill, an artist. She had good jobs, both teaching and cooking, but when Bill proposed moving to New York, she was fully on board. “We got a place in Brooklyn, and I worked in Manhattan at the Institute for Culinary Education (ICE), where I taught and wrote curriculum for both professional and recreational classes in international cuisine, and at the Natural Gourmet Institute.”

Eventually, the couple returned to Traverse City, and Allen realized a dream that she had long harbored: opening her own restaurant, City Kitchen. After just two years, health problems forced her to close it, but soon she was approached by Chateau Chantal Winery and Inn on Old Mission Peninsula about establishing a winter cooking school there, which ran for ten years. She was also tapped to write a regular food column for the Traverse City Record-Eagle, something she continues to do to this day. And then—because this Energizer Bunny never slows down—she pitched the idea and got the contract for Discovering Global Cuisines. Asked if it was one of the biggest projects she had ever taken on, Allen sighs and smiles:“It’s the biggest—it’s my life work. I poured everything I have into it.”

*This story comes to us from Edible Grande Traverse.