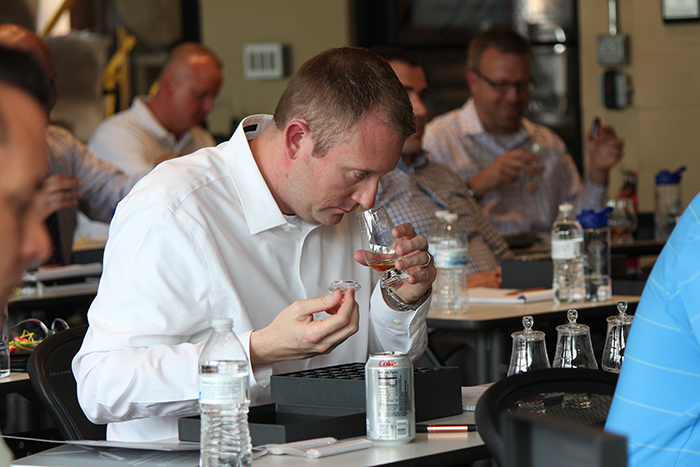 You are here: Home / Drink / Team Spirits at Moonshine University

Distilled Spirits Epicenter in Louisville aims to be national hub for craft distilling.

Mark Twain said people are essentially blind to opportunity because it’s dressed in overalls and looks like work. When David Dafoe spotted opportunity in 2010, it definitely resembled work, but it was also clothed in ignorance.

Dafoe was attending an American Distilling Institute conference in Portland, Oregon and saw its curriculum lacked serious classes for starting and running a distillery.

“These people were dying for information and they had the money to get a distillery started,” said Dafoe, founder of Flavorman, a custom beverage production company in Louisville. “But there was really no one teaching them there.”

Dafoe believed craft distilling was poised for explosive growth, and he wanted to accelerate it by creating a comprehensive distiller course. Flavorman’s experienced beverage development team and Kentucky’s deep bench of distilling talent would teach it.

The endeavor would be called the Distilled Spirits Epicenter (DSE) and feature a fully functioning grain milling and distilling operation, as well as a classroom for instruction. It would be “the one place where you could get a structured education on distilling,” Dafoe said. 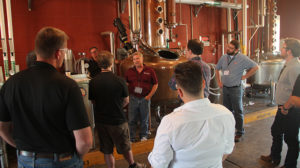 The two-pronged mission of the U.S. Alcohol and Tobacco Tax Trade Bureau (oddly abbreviated as TTB) is ensuring the country’s supply of potent potables is safe to drink and its strict rules of labeling and distribution are followed robotically. Its rules are notoriously obtuse—sometimes to regulators themselves—and its burdensome workload amid an American spirits boom ensures the gap between application and approval remains wide.

Not surprisingly, when the Flavorman team approached the TTB with its business plan for the distillery and booze school, regulators were baffled.

“What we were trying to do was completely new,” said Colin Blake, DSE’s director of spirits education. Perhaps another reason why Blake is so forgiving to this oft-criticized branch of government was its struggle to understand the impracticality of DSE’s solely instructional and pricey $600,000 professional distillery. The spirits made from the array of professional equipment would never be sold because doing so would trigger onerous fees and taxes. Distilling the grain to demonstrate the how-to made fiscal sense. “We told them we were making it and then destroying it, which they also couldn’t understand.”

Dafoe eventually convinced regulators to visit and see it for themselves.

“They finally came here, looked around and understood it in what seemed like 10 minutes,” Dafoe said. “We got the permit.” 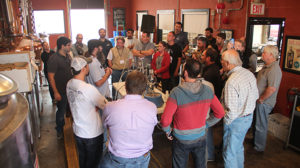 Moonshine University’s first class in 2012 welcomed 40 students paying nearly $5,000 per seat. The immersive, six-day experience took wannabe distillers through a grain-to-bottle experience, and helped them clarify their goals for products, marketing and facilities.

Flavorman staffers like Blake combined with veteran industry pros to round out the curriculum. Tapping that latter group, Dafoe said, could only be done in Kentucky, home to an unrivaled bumper crop of retired and consultant spirits makers.

“When many of these guys were making whiskey, they were just people [whiskey drinkers] knew nothing about,” Dafoe said. As a result of their teaching and exposure through Moonshine University classes, many of those veterans are busier now as industry consultants than they were when employed by distilleries. “Now they’re bourbon rock stars.”

The success of the distiller’s class has seen Moonshine University broaden to spirits other than whiskey. It now offers courses on gin, rum, tequila, maturation, fermentation—even a class on nosing for faults in distillate. Since 2012, more than 1,400 people have taken industry-centric courses there, and another 2,000 consumers have taken classes under its Stave & Thief Society banner. S&TS educates consumers and restaurant and bar industry professionals about the making, aging and serving of bourbon.

“That’s why this is called the Epicenter: Everything you need to know to run a distillery can be seen and taught within 50 miles of Louisville,” Blake said. 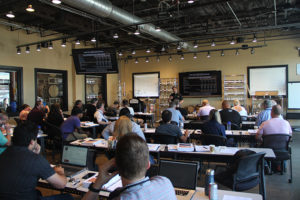 Graduates of the “Moon U” six-day distiller course represent 37 countries and 48 states. Some 160 distilleries have been launched around the world by graduates.

“Not only do we take some parental pride in helping start those, a lot of those people come back to sit on panels and share their expertise,” said Blake.

In one of her three careers, Joyce Nethery distilled chemicals for a Louisville industrial firm. But the high school teacher and chief financial officer of her husband’s company had no interest in distilling spirits when she showed up for that first distiller course in 2012.

Her husband, Bruce, “wanted to build a distillery, and he found the Moonshine University class,” Nethery said. But when a work conflict kept him from going, he convinced Joyce to go in his place.

“I thought building a distillery was a crazy idea, but there I was—back of the room, arms crossed, grrrrr—and then it started growing on me,” Nethery said. “After a few days, I was into it. I loved it. And it was pivotal on our journey to create Jeptha Creed.”

Her Shelbyville, Kentucky distillery includes a farm tour of fields where her family plants and harvests Bloody Butcher heirloom corn for use in its vodka, moonshine and straight bourbon. Her Moonshine University experience, Nethery added, helped clarify how to make Jeptha Creed one of a kind.

“That’s really where the concept of ground-to-glass came from,” said Nethery. “They helped us develop a story and encouraged us to do something completely unique.”

Another alum, Caleb Kilburn, lacked both a distillery and distilling job prospects when he borrowed money from his family for the distiller course. The trained chemist wasn’t “even much of a drinker, and I didn’t have a family legacy with distilling. I really loved the science behind it.”

Yet throughout the week-long class, his drive to get more information from instructors revealed his ambition for the work. Kentucky Peerless Distilling soon took notice and approached him about becoming its first distiller.

“I made some amazing contacts in that class,” said Kilburn, now KPD’s master distiller. “To this day I still reach out to them for advice.”

Kilburn said DSE courses were invaluable for learning the mechanics and chemistry of spirits production, but there’s no overlooking its value as a networking hub.

“It’s why it’s a world leader in distilling technology and so many people are coming here to learn,” said Kilburn. “The human aspect to me is the biggest resource to this whole industry, and Moon U is developing that and sharing it with the world.”

*This article was originally published in Edible Louisville & Bluegrass.