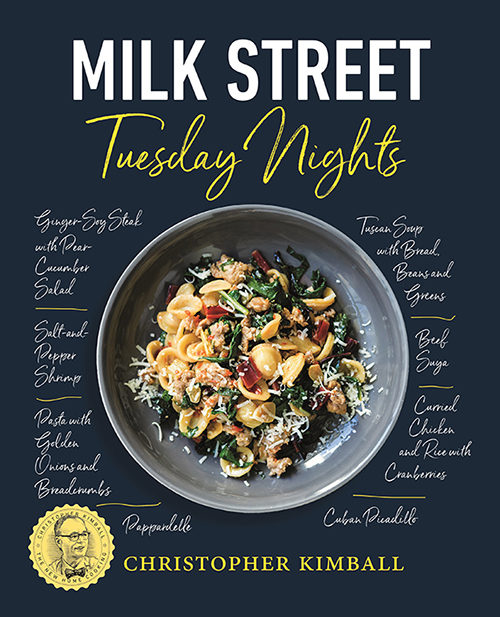 Christopher Kimball wants to save us from blah weeknight dinners.

Earlier this year, I wrote about Cook’s Illustrated Vegetable’s Illustrated, a book that brought me face to face with the home cook I was 15 years ago. It made me see that the food zeitgeist changes and home cooking goes with it, whether I notice it happening or not.

This article is about a related book, Milk Street Tuesday Nights. After leaving Cook’s Illustrated a few years ago, Christopher Kimball went on to found Milk Street. Though the two brands have a lot in common—both publish recipes and have TV, magazine, and internet presences—cooking from their respective recipes shows how different they are under the skin.

Express trips around the word

First of all, Milk Street Tuesday Nights breaks most of its recipes down into the following sections: Fast, Faster, and Fastest. Kimball and his band of recipe writers class up the 30-minute meal for a crowd whose palates have transcended the Rachael Ray milieu. The vast majority of recipes in this book hit the table in under an hour, many of them as quickly as 20 minutes. As I cooked through this book, it was impossible not to recall the hours and whole afternoons I had dedicated to certain Cook’s Illustrated recipes. Few of us have the time for three-hour enchiladas or finicky cauliflower cakes, especially not after work.

Milk Street’s relentless focus on ingredients and techniques gleaned from culinary travels around the globe sets it apart as well. “For as long as French Cooking has ruled the world,” Kimball writes in the book’s introduction, “we’ve been told [time]–and heat–were constants, the critical components of flavor. Turns out that’s only true in European kitchens.”

I don’t totally agree with this. French cooking hardly rules the world; whether it appears to has always depended on where you focus your attention. And Europe is a large place with an incredible diversity of cuisines, many of them replete with their own fast and delicious recipes. What I do cosign is that it makes sense to think outside your own culinary frame of reference, whatever that may be, to try ingredients and techniques from all around the world with speed and maximum flavor as the goal.

Ingredients that define a dish

For example, Sumac-Spiced Chicken hinges on a quantity of sumac–a full quarter cup–that, the first time I cooked it, seemed wrong. Vivid sumac puckers your mouth; typically you add it by the teaspoon. Pine nuts, a half cup of them, suffuse the dish with their singular buttery flavor. When stewed with sumac, pine nuts, and a handful of other ingredients including a whole onion, the chicken thighs become tender and easy to shred onto waiting pita bread. It’s about the most flavor I can imagine wringing out of 40 minutes and 10 ingredients.

Braised Chickpeas and Spinach, which takes its inspiration from Spain, ticks a lot of my own boxes for a winning weeknight meal. I always want new ideas for beans and greens, partially because I love them and partially because I know they’re really good for me. There’s an everydayness implied in a book with “Tuesday” in the title. Any collection of everyday recipes should at least nod to wellbeing, so intimately connected with what you eat.

Healthiness aside, the recipe satisfies. It’s hearty and filling. Thanks to an abundance of garlic, a kick of spice, a shower of smoked almonds, and no small measure of olive oil, the dish delivers on bold flavor, too. Like each recipe in the book, textures are considered. The crunch of the nuts and a layer of fried breadcrumbs keep every bite interesting.

In the absence of groceries, inspiration, and time, I default to pasta. That’s been the case since I first learned to cook. It’s still true, but Milk Street Tuesday Nights has changed my pasta nights for the better. There are plenty of pasta recipes in here, most of them highly alluring and speedy to prepare.

The Whole-Wheat Penne with Broccoli and Chevre calls on the aforementioned crunchy breadcrumb trick to vary texture–an idea I’ve applied to other pasta dishes because it really works. Anchovies add a savory dimension, juice and zest bring lemony zing, and the chevre, mixed with olive oil and pasta cooking water, melds into a creamy sauce that clings just enough to each ziti. No broccolini? It’s okay—use broccoli florets instead. Even frozen ones would do the trick. It is Tuesday night, remember?

A strategy for sides

Another section of the book is called “Easy Additions.” Recipe for recipe, it’s my most-cooked-from section of the book. There’s a recipe for yogurt flatbreads I’ve made countless times. I’ve used it instead of pita as a bed for the Sumac-Spiced Chicken, to wipe up my own homemade hummus or baba ganoush, or as an accompaniment for Indian curries. Leftover rounds make great instant pizza crusts or croutons for an improvised fattoush. You’ll also find a refreshingly different grain salad (made with bulgur, tomatoes, and pomegranate molasses) and several Asian-inspired stir-fried green vegetables.

The fact that I’ve failed to cook a single dessert out of the appealing Sweets section proves this book accomplishes what it set out to do. We all know that Maple-Whiskey Pudding Cakes and Triple-Almond Cookies are not really for Tuesday nights. The recipes from this book that have earned a spot in my rotation are more everyday standbys than special occasion treats.

Milk Street Tuesday Night offers just what many of us want right now, this minute, as the summer gives way to fall’s more frantic pace. Weeknight meals still need to be made, and they need to be made fast. As long as your pantry is well stocked and you’re game for some new techniques, this book can give dinner the flavor of adventure at the end of the daily grind.