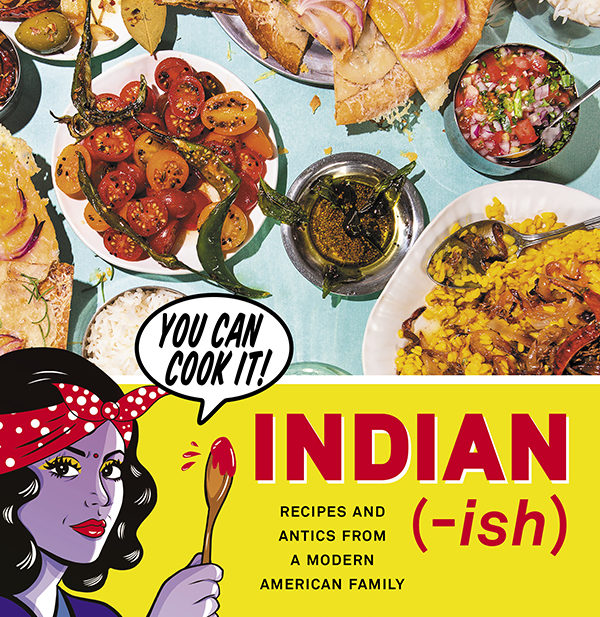 You are here: Home / Cookbook Club / Indian-(ish): Recipes and Antics from a Modern American Family

Priya Krishna’s tribute to her mom’s cooking is our Edible Cookbook Club selection for August 2019.

The spice aisle at International Food & Spices was longer and more extravagantly stocked than I expected it to be. I came prepared with an alphabetized shopping list, but I still needed to ask for help finding asafetida. The bottle it’s sold in is labeled “hing,” so I almost missed it.

Usually, if I need anything beyond typical supermarket inventory for a cooking project I order those items online or make a substitution. I’ve been cooking Indian-inspired recipes for years without asafetida, after all. And even Priya Krishna, whose cookbook Indian (-ish) had sent me on this particular grocery run, told me asafetida was “optional, but really great.”

I had already made Krishna’s recipe, or perhaps more accurately her mom’s recipe, for Spinach and Feta Cooked like Saag Paneer, and I needed to know how it could possibly taste even better than it had without that optional ingredient. When a writer gives me a recipe this powerfully delicious, I become willing to do anything she suggests.

So when I read Indian (-ish)’s essay “Fantastic Spices and Lentils (and Where to Find Them),” I took it more seriously than usual when Krishna urged me to pass Amazon over in favor of supporting my local Indian grocery store. And I’m so glad I did because not only did I check everything off my spice list and pick up eight pounds of organic long grain rice for $13, I also learned this grocery store makes the best samosa in town. My DMs filled with friends telling me to buy one as soon as I Instagrammed my shopping trip. Amazon may offer almost everything, but you still can’t get a hot, homemade samosa as you check out. 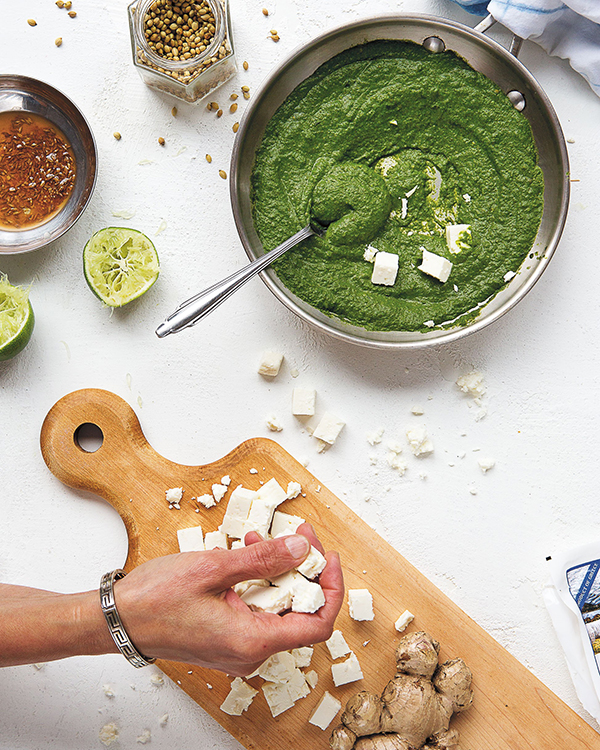 Indian-ish, by Priya Krishna with photography by Mackenzie Smith

But let’s get back to that Spinach and Feta Cooked Like Saag Paneer. I struggled to imagine how these two foods I knew so well would come together. Would it be too salty? Would the feta dissolve? Would it be like a hot strange Indian-spiced pureed spinach salad? In anticipation of making this dish, I tasted three kinds of feta at the cheese shop and chose one from France because it tasted less briny, more paneer-like, than the others.

I remained skeptical of this dish, in spite of the dizzying aromas of frying coriander, cumin, and onion, right up until I tasted it. All present the night I served it wanted to know when I’d make it next, and could they come over for dinner again?

And I didn’t even have the asafetida!

At first, I thought this idea of using feta instead of paneer was a completely original impulse, but it took consulting exactly one other cookbook written by an American food writer with an Indian parent to see that from a certain perspective, it’s an obvious mash-up. In her book, The Complete Indian Instant Pot Cookbook, Chandra Ram calls for feta in a twist a paneer-based dish as well.

This inspired nimbleness, the mixing-and-matching of readily available ingredients with family recipes from another place, is about as American as home cooking gets in 2019. It’s something that Andrea Nguyen writes about in her book, Vietnamese Food Any Day. It’s one way immigrants and their families make “their” food everybody’s food, the cuisine of a not-always-comfortably-shared American food culture. It’s the opposite of cultural appropriation.

In her recipe for Chickpea Flour Green Beans, Krishna complains, “Now that apparently every child is gluten-intolerant, I see mommy bloggers hailing chickpea flour on their websites as this **breakthrough** discovery. I hate to break it to them, but Indians have been experimenting with this alternative flour for centuries.” She goes on to note that this recipe was beloved by her late grandmother and says it’s her favorite use of chickpea flour.

Many Indian snacks that call for chickpea flour are fried, but this recipe is simply sauteed in a skillet. When I made it, the chickpea flour mixture didn’t adhere well to the green beans, but the overall effect was spicy and savory and some bits did crisp up, especially upon reheating. I have long stocked chickpea flour to make socca, a French skillet flatbread that I top almost like a pizza, but I’m thrilled to have this new-to-me use for it. Spiced with ajwain seeds, turmeric, asafetida, and fresh chili, these green beans are something I craved the minute they disappeared.

During my spice shopping spree, I picked up multiple kinds of lentils, including urad dal. These are split black lentils that have had their black husks removed, so they’re also sometimes called black lentils. I’m grateful to Krishna for laying this out for me right in the ingredients list because the lentils in the package are white. I needed them for the Caramelized Onion Dal recipe, which Krishna writes “inspires a unique level of mania in people who try it for the first time” and compares it to risotto. I’m always in for a new level of mania as it pertains to food.

Dal–a thick, stewed lentil dish–is one the most warming, cozy foods I can think of. My plans for this recipe coincided with an unrelenting heatwave so I ate this dish in a poorly air-conditioned brick rowhouse on a day when the heat index topped out at 115. I liked it a lot, but I’m going to make it again in the winter when my enthusiasm for the warm blanket of a dish like dal could realistically approach mania. I also feel compelled to remind you, should you want to make this recipe yourself, that you cannot caramelize onions in the 8 to 10 minutes the instructions suggest. It takes about 45 minutes to caramelize onions. 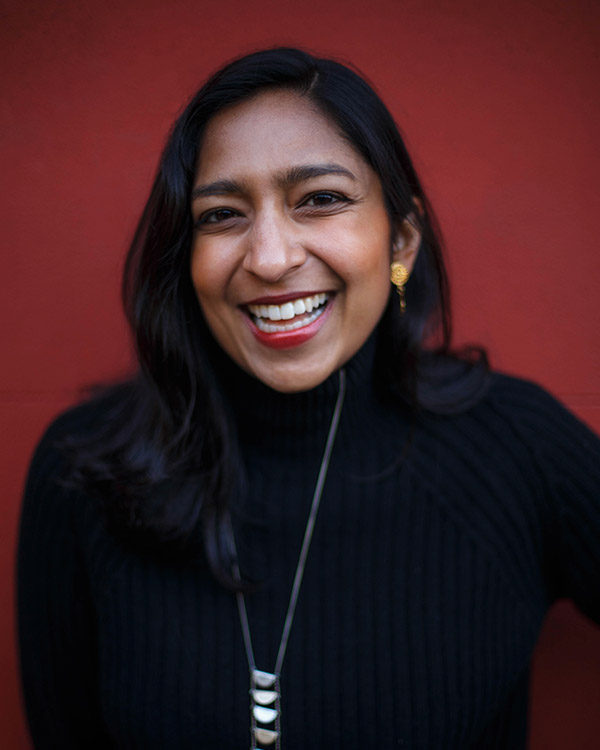 I could write a second essay about the overwhelming sweetness of the Krishna family and how growing up with the type of parents Krishna sings an ode to in her book is its own kind of privilege. For weeks, I resisted the many charms of this terrific book out of petty jealousy.

It was the part about “Dad’s Yogurt” and Shailendra Krisha’s essay entitled “Why My Yogurt Is Fabulous” that triggered my most unpleasant feelings. If you, too, hurt your own brain trying to conceive of any situation in which it would not be ridiculous for your father to make yogurt, maybe you know how I feel.

Anyway, after only one extra session with my therapist and watching the Bon Appetit video of Krisha making the yogurt while FaceTiming on camera with her dad a couple of times, I managed to see my own yogurt-making project as a way to re-parent my inner child or something like that. I made the yogurt, the instructions were easy to follow, and it was pretty good.

Indian (-ish)’s subtitle is “recipes and antics from a modern American family.” In a Q&A with Roads and Kingdoms, Krishna is quoted as saying, “I wanted to write a book and explicitly call it an American cookbook … and not present it as exotic or foreign or other, but just as the food that I grew up with.” She does this, and in the process shows us a nurturing upbringing grounded in food and family.

Her mother, Ritu Krishna, receives a “with” credit on the book’s cover. You’ll find recipes here for pizzas made on roti flatbread, simple avocado sandwiches, and a tofu breakfast scramble, all seasoned with Ritu Krishna’s special touch. When I was a kid, pining for home-cooked food and family meals, these aren’t the type of dishes I had in mind. I imagined the food I saw on TV sitcoms, the food I used to think of as American: roasted chicken, meatloaf, tuna noodle casserole. But that idea of American food has always been as fictional as TV families themselves. We’ve always been a nation of immigrants, and a world of flavors shapes the national table. Indian (-ish) is one dazzling case study.

Some cookbooks magically conjure a very precise sense of place; but Indian (-ish) brings one specific family to life through their recipes. The book is American because the Krishnas are.