Have you ever heard someone tell you about that time they were wandering the library or bookstore–no particular agenda, just browsing–when a book suddenly fell off the shelf, open to a page containing the solution to some problem or an idea that changed their life?

These stories are often set in the self-help aisle. Of course, there are variations on the theme: sometimes the relevant book seems to pulse and shimmer, ineffably calling to the reader. I’ve spent a lot of time in this life lost in library stacks and pacing book shops, mostly in the cookbook section, it’s true, but nothing like this ever happened to me.

At least, not until recently.

In December of last year, the week between Christmas and New Years, my father had a debilitating stroke. He’s had many serious health issues for years and I’ve long coordinated his care, so his stroke and all the events that followed, including moving him to a nursing home, affected every part of my life.

In particular, I’ve struggled to cook. During many hard times, cooking has been a form of therapy, a way to take charge of one small thing, a mini oasis of pleasure when things feel beyond my control. But for months on end, I could barely crack an egg. I ate peanut butter and jelly sandwiches and many bowls of cereal. I compelled my husband to cook or we ate at restaurants.

One day, I stood before my bookshelves and the bold white letters on the spine of a particular volume glowed. Dinner: Changing the Game by Melissa Clark. It was calling to me. I pulled the book from the shelf and it fell open to page 45, Sesame Chicken with Cashews and Dates. This book came out in 2017; I’d already cooked from it a lot. How had I never noticed this dish before, with its combination of my favorite things? The chore of shopping still felt too hard, so I ordered the groceries I needed for delivery. It wasn’t a long list.

The prep wasn’t arduous. There was minimal chopping. In a rare instance of cookbook time reporting accuracy, it was advertised as taking a total of 20 minutes and it did. The sweetness of the dates, spiciness of the chilies, and salt of the soy sauce actually registered on my tongue as delicious and interesting. I made it two nights in a row and felt drawn to my kitchen again. A few months later, I still turn to it to kickstart my culinary joie de vivre.

A book for all cooks

For me, this dinner changed the game, but not exactly how Clark intended. In her introduction, she writes about how the way Americans eat at restaurants has changed a great deal in recent decades, with diners choosing a mix of small plates and perhaps sharing entrees, while many home cooks still cling to the idea that dinner is a meat, a starch, and vegetable. Eating at restaurants is eating for fun; dinner at home is a matter of duty. With this book, Clark brings some of that restaurant pixie dust to your own dinner table.

Another inviting aspect of Dinner is the notion that each recipe is, unto itself, a complete meal. No sides, no extras. Sure, Clark provides a section of sides for those times you have more ambition, and certain recipes do beg to be served with something else, but for the most part, mission accomplished.

This dual promise: a one-recipe dinner of something with a high let’s call it restaurant-y quotient can seduce all kinds of reluctant cooks (the bored ones, the overwhelmed ones, the depressed ones, and lost-mojo ones) to the kitchen. A skilled and prolific recipe writer and cookbook author, with dozens of books and a long-running New York Times column to her name, Clark’s most impressive skill might be her ability to know what her readers want to eat and just how much work we’re willing to do to make it.

Food that defines our times

I’m quite sure in a decade or so, I’ll look at this book as a time capsule of this era’s cravings, trends, and pet ingredients. It’s a snapshot of how we want to cook and eat now. On the page after that sesame chicken, you’ll find Anchovy Chicken with Lemon and Capers, which was first published in the New York Times. My printout of this recipe is transparent with olive oil splatters. I’ve cooked it so often over the years since it was first published that I don’t need to follow Clark’s written recipe anymore. Like a Tori Amos song from my adolescence, I know all the words by heart.

Clark writes about the winds of change and prevailing food trends in some of her headnotes. The Farro Salad with Cherry Tomatoes, Smoked Mozzarella, and Mint begins by referring to the way farro salads supplanted pasta salads at cookouts–a transition that may be complete where Clark lives in Brooklyn but is ongoing through the rest of the country where farro remains a specialty item. But this minimalist recipe would definitely appeal to someone looking to upgrade their 80s-era cold pasta salad with something roughly 10 times as delicious and just as easy.

In fact, as I made it, I thought it was suspiciously easy, too easy. I feared it would fall flat, taking its place as the first dud I’ve cooked from Dinner. If you don’t count pantry staples like salt, pepper, or olive oil, this recipe has only five ingredients. I cannot recall the last time I reached for smoked mozzarella, but this salad really shows what a few simple, well-chosen ingredients can do. Salty, rich, creamy, smokey–the cheese brings many more dimensions to this recipe than it seems like it should.

This recipe shook up my home cooking habits. I typically stick to three to five types of cheese. That’s why the smoked mozz was such a revelation; I don’t usually use it. Ditto vinegar: I have a bottle of sherry vinegar, but it was dusty when I unearthed it to mix up this salad. (Side note: I think Clark is cooking with a more expensive, gourmet-store type sherry vinegar, judging from the inky dots in the accompanying photo.) And then there’s the herb. If a salad includes mozzarella and tomatoes, it’s almost the law that you’ll reach for basil. But mint? What a refreshing way to defy expectations and keep your tongue on its toes. Surprises and discoveries make cooking fun.

Ultimately, it’s these twists that allow me to cook from Dinner even when I don’t feel like cooking at all. There’s trust. I know that when I’m done I’ll have a meal that lifts me up, one that can make even a low-mood day feel like a micro special occasion. Lots of recipes in this book have become, for me, reliable pick-me-ups for down-in-the-dumps days. My favorite such dish, going back to even before the universe insisted I cook that date-and-chicken recipe I told you about, is the Cold Sesame Noodles with Celery Salad.

I’ve made and even written dozens of recipes for sesame noodles over the years, but this one is in a class by itself. The noodles themselves are just what we know and love: springy strands of pasta coated in a nutty, sweet sauce crackling with chile paste and ginger. But the salad, the celery salad: this is what changes the game. Infused with the tingle of Sichuan peppercorns and the bright pop of rice vinegar and cilantro, the celery brings crunch, freshness, contrast, and excitement. It also moves the dish from the realm of starter or side dish into legitimate dinner territory.

I’ve cooked plenty from this book over the past couple years, but there are recipes I’ve put behind glass, like a fire extinguisher, in case of emergency (looking at you, Chorizo Pork Burgers with Grilled Honey Onions and Manchego). I’m saving them for the next time I need to restore my will to cook. I know I will need Dinner to rescue me again.

Join us on Facebook to talk about the book or just the handful of recipes we discussed above—Melissa will be joining in to answer questions before too long. 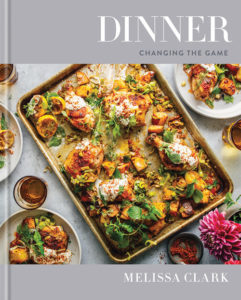 Disclosure: there are affiliate links on this page and we receive a small commission (at no extra cost to you) on the sale of these items.